Run, explore and blast through the undercity with trustworthy robot sidekick in this otherworldly Lovecraftian adventure

MAY 28, 2020 — Headup is delighted to announce that Outbuddies DX, a 2D side-scrolling adventure game in the spirit of the classic ‘Metroid’, is coming soon to Nintendo Switch and Xbox One with the PS4 version planned for later this year. Developed by Julian Laufer over the course of seven years, and first released on Steam and GOG in October 2019, Outbuddies is a feature-packed otherworldly adventure with deadly enemies and an ever-trustworthy robot sidekick, Buddy.

Set deep in the Ocean and infested with hostile Lovecraftian creatures and lethal environmental hazards, players must dash, dodge, and blast through Bahlam, a danger-filled sunken fortress of the Old Gods. By deploying the Buddy unit to manipulate and scout the surroundings through hacking, scanning and telekinesis, the players will discover ancient weapon systems and gear upgrades to battle through a gigantic sunken labyrinth. Outbuddies’ local co-op mode allows a second player to control Buddy with an expanded tool set.

Outbuddies offers a nonlinear gear-based progression system for both combat and level-layouts. Selecting weapons from the four-tier upgradeable system, as well as split-second reflexes and memorization of attack patterns are essential for players to stand a chance against an onslaught of unforgiving bosses and to escape Bahlam’s hostile maze. Outbuddies‘ praised atmosphere is supported by OGRE’s thematic soundtrack written as an ode to the 16-bit Megadrive/Genesis era.

Based on the feedback from core-speedrunners and Metroid-enthusiasts since the game‘s PC release, Outbuddies DX now offers vastly improved visuals and a variety of new features added to the well-received original.

For more information, tune into Guerrilla Collective’s online session with Headup at www.guerrillacollective.com and follow them on Twitter for more details. 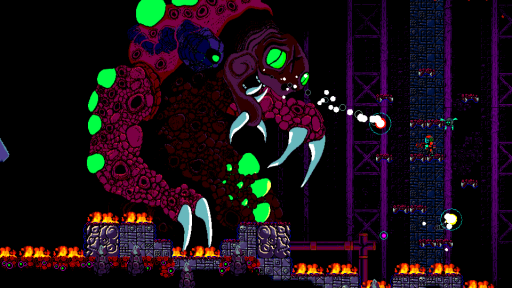 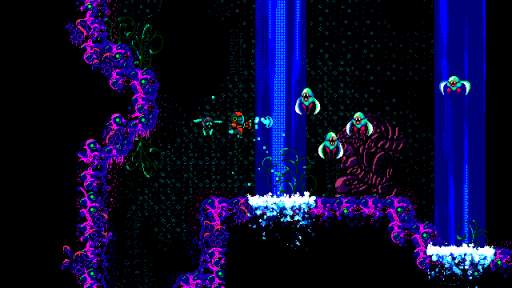 Enter Bahlam, a sunken city of the Old Gods, located deep in the South Atlantic Ocean. In the wake of a shipwreck, adventurer and maritime archaeologist Nikolay Bernstein regains consciousness 36,000 feet under the sea. He is severely wounded and unwillingly connected to a supernatural Buddy-unit. Searching for answers about his displacement, Nikolay digs deep into the lost undercity, gradually realizing an ominous presence lurking in its shadowed caverns.

Praise for Outbuddies so far:

“This is my favourite Metroid-me-do since Axiom Verge […] I’ve had a very splendid time with this, and have much splendid time left with it. A proper fine achievement, and a game worthy of measuring against the mighty Metroid.”
Rock Paper Shotgun

“It is games like Outbuddies that remind me of why I choose indie games over AAA.”
9/10, The Video Game Autopsy

“It was well worth the wait: The skillfully crafted title puts back the focus on exploration with one of the most impressive level-designs of the genre!“ Gazette of Independent Gaming

What players are saying:

“I wish more metroidvania games were this bold when it comes to world design.“

“The atmosphere of Outbuddies is incredible. Throughout the entire game, there is that sense that you are in a hostile and alien world that humans were never supposed to discover.“

“The boss design is some of my favourite of any metroidvania ever.“

“It is classic Lovecraftian writing but it is so infrequent that it is used properly and that is what makes the plot, setting and world of Outbuddies so special.“

“Outbuddies deserved to set in ranks of; Super Metroid, Castlevania: Symphony of the Night, Hollow Knight, Axiom Verge and Dust.“

Headup is a hybrid games publishing and development company providing players worldwide with the best content in the independent gaming sector. Established in 2009, it is active on all major platforms such as consoles, mobile devices and PC, and was awarded as “Best Publisher” at the German Developers Awards in 2012, 2013 and 2017. With over 80 million customers served on mobile and further several million players on the PC and consoles, Headup is always looking to raise awareness and commercial success for developers thinking outside the box. More information can be found at www.headupgames.com, Twitter and Discord.

The development of Outbuddies started as a spare time passion-project in early 2013, influenced by timeless classics of my childhood starring Super Metroid, Castlevania, Super Mario Bros., and Mega Man. The quality, depth, and acceptance of indie metroidvanias like Axiom Verge & Hollow Knight proved what can be achieved by small teams or even single persons. Those developers inspired me to allocate even more personal resources and dedication to the project so it could eventually evolve into something really special.

As a father, daytime employee, and gamer myself I loved how progression and iteration were tackled in outstanding indie platformer Celeste, so Outbuddies was designed to provide challenging and encouraging gameplay while skipping punishing throwbacks and grinding mechanics in total. I listen to feedback and I’m dedicated to support and improve the game further after release, so shoot me your feedback anytime!