May 26, 2020 — Award-winning games publisher, Headup is delighted to announce that Rigid Force Redux, a horizontal shoot ‘em up with modern 3D-Graphics, is coming to Nintendo Switch and Xbox One very soon.

Developed by com8com1, a studio led by Marcel Rebenstorf, who previously worked at Ubisoft Blue Byte on titles such as the ANNO series and Might and Magic Heroes Online, Rigid Force Redux breathes new life into the classic side-scrolling shooter genre with its lovingly hand-crafted 3D models, stunning environments, detailed effects, and an electrifying Synthwave soundtrack.

Get on board the spacecraft, Rigid Force Alpha, and navigate through various atmospheric levels and face an onslaught of enemies, from low level cannon fodder to sprawling bosses. Collect numerous weapons including an upgradeable missile system and ‘Force Shards’, adjustable supplemental units that let the players shoot in multiple directions and block incoming enemy fire. Capture Energy Orbs dropped by foes to boost Rigid Force Alpha’s power supply and unleash devastating blasts to wipe out enemies at critical times.

For more information, tune into Guerrilla Collective’s online session with Headup at guerrillacollective.com and follow them on Twitter for more details. 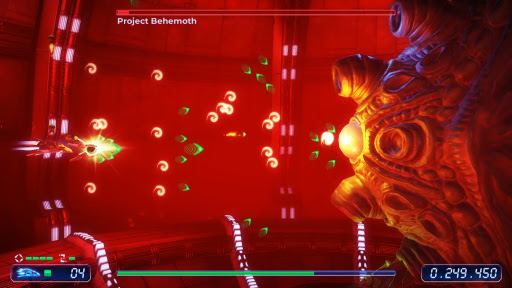 Battle it out against huge swarms of enemies, heavy gunships, laser wielding mechs and giant alien creatures. Every enemy has its own unique and challenging strategy, from the tiniest creature up to the largest boss. Arm your fighter with numerous upgradeable weapon systems and supplemental Force Shards! Collect Energy Orbs to fill up your energy supply and eventually unleash an extremely powerful blast against your foes! Just in case the extensive, action-packed Main Mission is not enough, try the challenging Arcade and Boss Rush Modes, defend your ranking in the global leaderboards and grab all 40 achievements.

About HeadupHeadup is a hybrid games publishing and development company providing players worldwide with the best content in the independent gaming sector. Established in 2009, it is active on all major platforms such as consoles, mobile devices and PC, and was awarded as “Best Publisher” at the German Developers Awards in 2012, 2013, 2017 and 2019. With over 80 million customers served on mobile and further several million players on the PC and consoles, Headup is always looking to raise awareness and commercial success for developers thinking outside the box. More information can be found at www.headupgames.com, Twitter and Discord.About com8com1com8com1 is an independent game developer based in the Metropolitan Region of Hannover, Germany, and founded by industry veteran Marcel Rebenstorf, who previously worked at Ubisoft Blue Byte on AAA brands ANNO and Might and Magic Heroes Online. They closely collaborate with artists and industry experts, known and praised for their contributions to hits like Golden Sun, Time Splitters 3, Burnout 3, Heart & Slash and Elliot Quest. As a passionate indie studio, they aim to establish themselves as experts in creating rich and engaging games that you will love playing. More information can be found here: http://www.com8com1.com